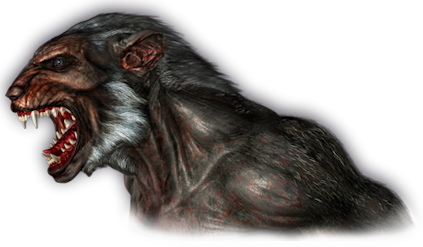 First and Foremost:  Werewolves are called Lupus, and Werecats are called Felid.  Lycanthrope are also called Animal, or Beast-kin.

Tribes:  Each line of lycanthrope was born of a tribe, each with special tribal gifts. See Tribes page. Those not born of tribes, are called mongrels.

When is the Full Moon Phase played?  Even though time in rp is different than in the real world, we use the real world to gauge when a full moon occurs.  If it is night in rp, and someone is playing during a full moon, then there is a full moon during play.

Siring:   Lycanthrope sire in two ways, by bite and by mating. The following are the possible resulting breeds of lycanthrope.


Sapiens Breed:  When Lycanthrope mate with a human, these children are born human, but only one in eight children might 'come of age' to shift into a lycanthrope Sapiens, the rest are human but immune to becoming a lycanthrope.
Hybrid Breed:  When a Lycanthrope mates with another Lycanthrope, it results in Lycanthrope that are half bestial, or crinos-like in their appearance. They cannot be passed off as humans which causes serious problems. Hybrids themselves cannot reproduce by mating. Sator lycanthrope alone can produce hybrids that have very subtle, to almost no bestial traits.
Lupine (wolf) Felidae (cat) breed:  When a Lycanthrope takes an animal mate the same kind as they (wolf with wolf, tiger with tiger, lion with lion etc, the lines remains pure but the offspring is born AS an animal and remains an animal for several years before making the human shift, and by then, they are an adult as an animal.
Lycanus-Breed:  The Lycanthrope infects another by bite.  These Lycanthrope are called Lycanus.  In order to Sire by bite, the Lycanthrope inflicts chosen with a wound and laps at it for a period of half an hour or more, until the wound is licked clean and it heals with the regenerative power of their saliva.  The change to 'The Bitten' happens over a period of time, the next full moon bringing about the first shift.
Bestial-Breed: This breed does not have a human form, but speaks telepathically, and commands arcane gifts. They are sometimes Lupine or Felidae born which never made the change to human form, or very rare Sapiens that were born in animal shift and never made the human shift. This usually occurs because of some serious trauma to the mother during pregnancy, or some mental flaw.

Blood Loss:  Blood loss weakens the Lycanthrope, and CAN result in death if the wounds do not heal, (as from a silver wound or enchantment), but the blood regenerates fairly quickly otherwise, although blood loss leaves the Lycanthrope very thirsty and hungry.

Silver:  Lycanthrope are allergic to silver.  It does not kill them immediately, but rather makes wounds heal slowly and works its way into the blood to make them very weak, and in time, it WILL kill them if enough silver gets into the bloodstream.

Inborn Traits:  Lycanthrope are very strong, as strong as vampires.  They can leap and jump a long distance without damaging themselves.  They are very quick and have super-keen senses.  They are very intuned with the natural world.

Shifting: They can shift at will, but under the moon of their order, and during a full moon, they are especially adept at shifting and they are much stronger in every way (by +2 levels), including their gifts.  The older a werewolf or werecat, the more adept they are at controlling their shift, and the stronger their inborn traits and gifts become.   All young lycanthrope, between the age of 1-60, shift when they see a full moon. It is the actual visual connection which triggers the shift. If a lycanthrope is blind (good question raised by Kierstian mun) then the full moon does not affect them and they shift only at will, unless some light penertrates their pupils which they can see, in which case they will shift when the light of the full moon penetrates their eyes.

Learning their Gifts:  All their gifts are 'innate,' and thus they learn them far more quickly than vampires learn theirs.  Their Gifts all have to do with nature, their pack or themselves, all of which they are very attuned to, and learning their gifts comes quite naturally, it is having a good teacher, and perfecting them that makes the difference.

How Lycanthrope can Die:   Kill them and they shall die, only it's NOT that easy.  They are tough, quick, regenerate (the older they are, the quicker they regenerate) and they have quick reflexes.  Destruction of their bodies kills them, and silver can poison them and make them succumb more easily to mortal wounds.  Beheading them will kill them as well, A heart, throat, brain, or femoral wound, injures them badly.  Wounds, IF deep enough, will leave scars on Lycanthrope.

Aging:  They age 1 year for every 30 years, up to age 50-60 in appearance.  Lycanthrope age very slowly once they 'come of age'.  Their first shift into animal form from human form marks their coming of age. This age is usually around 16-17, but can on rare occasions happen younger. They can live at most for two thousand years.  Life span depends on their health to begin with, and how healthfully they live their lives.  The average lifespan for a Lycanthrope that does not get killed in conflicts, is 1200, for they do live hard lives.  Some Lycanthrope simply weary of life and give themselves over to Gaia at an age they choose long before two-thousand.  They age in appearance very slowly.. and by year 2000 they may only look fifty to sixty years old, for by the code of nature, people do not normally live to be older than that.

Rare Immortal Lycanthrope:  Sator Werebeasts are born during a Wraith Moon, are immortal, and have higher regeneration, While Geminid Werebeasts (half Sator) attain agelessness through the divine gift of Gaia, and are quasi-immortal.  Immortal and quasi-immortal sapiens, hybrid and true born breeds stop aging between 18-30 in their human appearance, and at 2-6 years in beast form.  Mortal wounds will kill quasi-immortal breeds.

Feeding:  Lycanthrope like raw meat, fresh off the bone, but can eat anything.  Raw meat gives them more energy though.  Lycanthrope tend not to hunt humans, preferring other game, namely because it is cleaner, tastes better, and makes them feel better.  Some do become 'manhunters' however, due to a lack of game, or grievances against the human race.

The Pack:   Werewolves almost always, but not always, belong to a pack.  They are unhappy without a pack, just as wolves are.  Lone Wolves are usually distrusted until it is known why they do not have a pack.  If they were driven out, it raises a lot of doubt, for it takes a serious violation to get tossed from a pack.  Other lone wolves are last survivors of a pack that was hunted down, and still other rogue wolves choose to be alone, due to a taint in their nature, or some grievance with their own kind.  Strong packs have a tight social structure, with a chain or hierarchy, Starting with the Alpha male and female, with each subordinate underneath having their own place in the pack, even the lowest in the order HAS a place.  Every member of a pack is counted valuable for something, or they are driven out, which is the highest order of shame.  Typically, packs are tight, and well organized in their own way, but without good leadership, the pack falls apart and everyone suffers for it.  The leaders are the teachers as well, and if nothing is learned, pups remain pups, have no discipline and real understanding of survival in that world between.

Rare Beast-kin:  Therianthrope; These are beast kin who do not shift during a full moon.  They shift at will, are not controled by the moon, and are quasi-immortal.

Demonic Animal-kin:  Also have arcane shadow or fire elemental ability, and have other traits and powers connected with their demonic kin.

Silver: If enough gets into their blood stream it can kill them.  Silver also slows regeneration.  Elven, Morashtar and Demonic werebeasts do not react to silver.
Poison: poisons affect werebeasts, with exception of demonic breeds.  Angelic and elven breeds resist poisons (10% Elves, 40% angelicans, with purchase of higher percentages as lycanthrope builds up poison resistance.)
Wounds: If wounds are serious enough, and exceed regeneration rate, wounds can be fatal.  Beheading, heart, jugular, and femoral artery wounds are usually deadly.  Demonic and Angelic werebeasts must be physically destroyed to kill them.
Arcane Power: All werebeasts are vulnerable to magic.  Demonic, and Angelic breeds suffer double damage when hit by power opposing their arcane alignment.
Heirarchal Rule: (Werewolves and Lions)  Lycanthrope each have a rank in their pack or pride and are subject to that heirarchy.  Consequences of defying the laws of heirarchy can be perilous.

The Packs and Prides

About the Prides:  Felid are typically loners, while the Werelions have prides.  Other Werecat types are sometimes members of prides, or sometimes even packs.